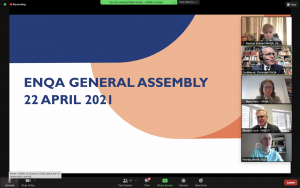 During the General Assembly the Board was elected. Douglas Blackstock from the British QAA was elected the new ENQA President. Cristina Ghiţulică and François Pernot (France) have been elected Vice-Presidents of ENQA. Newly elected Board members are Doris Herrmann (Germany) and Jolanta Silka (Latvia).

NAQA congratulates colleagues on their election and looks forward for further fruitful cooperation!